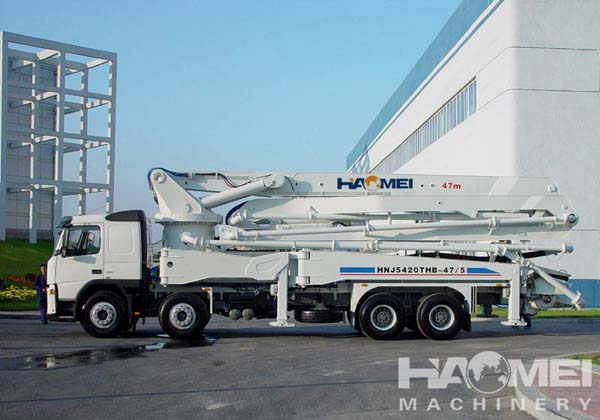 2. Open the boom frame and lower the hose test arm frame to see if there is any obstruction. Empty the placing boom for a few minutes and manually lubricate it until the oil comes out of the large and small bearing pedestal.

3. When pumping, first hit the mortar and then hit the concrete. For example, after mixing the mortar at the site into the hopper, add water and reverse concrete boom truck more than ten times, so that the mortar can be fully and even before the positive pump. At this point, the boom hose is placed in no man’s place, and the concrete material is moved to the designated position for pumping. It’s important to remember!

4. At the beginning of pumping, check whether the supporting leg is firm and reliable. If not, fasten it again.

5. At the beginning of the pumping, one truckload of concrete is sent to the pump for 4-5 times of lubrication (except for automatic lubrication) or the number of lubrication times is determined according to the actual use situation. Adjust pump discharge size according to site construction to achieve desired effect. 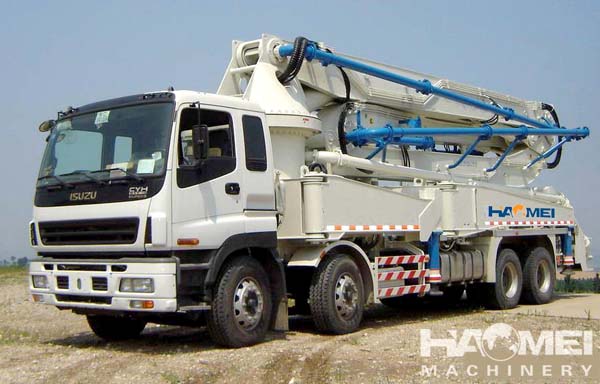 7. It is strictly prohibited to take over the concrete boom truck during delivery, which may easily cause damage to the arm frame; keep the arms as paraboloid or horizontal as far as possible.

8. The arm frame is 5M away from the high pressure line (very dangerous).

9. Check for abnormal noises, as is often the case.